Question #47 Will Obamacare get repealed? 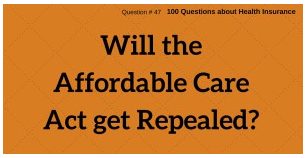 So, moving on, will it be repealed after he’s gone?  So let’s just say that another President comes in and wants to get rid of this plan, will it get repealed? There is a possibility; however, what I really see happening is that they will change the plan to make it more workable and better, and then hopefully change the name because as of right now, the branding on this name hasn’t gone over too well.  So, most likely, that’s what I see happening is that they just tweak the plan to make it more usable for those that need health insurance.

And that’s my answer to will Obamacare be repealed.

If you liked this blog, read: Why didn’t Obamacare work for me?